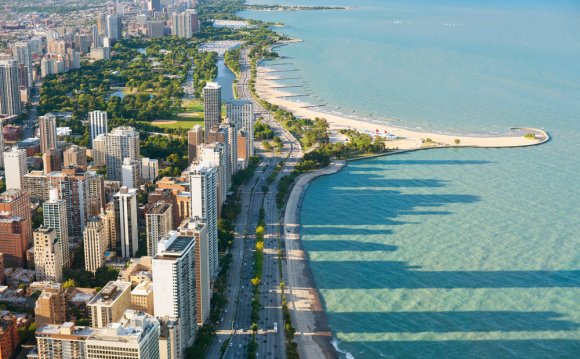 In the late 1990s and early 2000s, water levels in Lake Huron declined almost one metre in a few years and approached record lows set in the mid-1960s. Such lows caused severe impacts, including impaired shipping and navigation as well as changes to shoreline properties and beaches. In the mid-1960s, record lows were set due to a period of low precipitation which began around 1961 and ended at around 1965 (Changnon, 1993). The low lake levels of the early 2000s were caused by a number of factors, including climate. In the late 1990s, Canada experienced warmer than average temperatures. The summer of 1998 was the warmest on record in Canada, the national average being 1.8o C above normal (Environment Canada, 2002c). Lake Huron is part of the Great Lakes Basin (Figure 1.1), and within the Lake Huron region, temperature was only 1oC above normal, but precipitation was 20% drier than normal (Lake Huron Centre for Coastal Conservation, 2003). As climate change continues, Lake Huron’s water level will be affected.

Lake Huron’s water levels fluctuate according to natural and human factors. Natural factors include temperature, precipitation, evaporation, and runoff. Human factors, on the other hand, include water diversions, water control structures, dredging, and water use or consumption. When these two categories are compared, natural factors play a much larger role in affecting Lake Huron’s water levels.

The community of Oliphant, Ontario, is located along the western shores of the Bruce Peninsula. Oliphant was chosen as the research site because the shoreline environment and community are greatly influenced by fluctuations in Lake Huron’s water levels. Oliphant’s coastal zone is characterized by very low profile beaches, a shallow bathymetry, coastal wetlands, marine recreation and shoreline cottages. Thus, extensive areas can be impacted by lake level changes. There are also numerous offshore islands referred to as the Fishing Islands at this site. Figures 1 and 2 are examples of the Oliphant’s shoreline environment.

To better understand potential future impacts, a specific methodology was developed to investigate shoreline impacts on the town of Oliphant. Datasets that provided bathymetry, topography, and aerial information were used to create maps and digital elevation models (DEM) that display potential future coastal zone impacts in Oliphant. A raster bathymetry DEM was created to survey the impact from a serious drop in lake level on navigation, as well as other subsequent coastal issues. Also, a triangulated irregular network model called the Lake Level Change Model was designed to project possible impacts from a different shoreline configuration. Water level scenarios (Table 1) used in the GIS models are the result of the combination of published general circulation model (GCM) results and a hydrologic model. In addition to the published water level scenarios, four arbitrary scenarios were used to provide a more complete visualization of possible water levels. It is these water level scenarios or lake project water level change values that were plugged into the GIS models to create a new shoreline configuration. With different shoreline configurations, potential coastal zone impacts can be estimated.

Map results showed a variety of shoreline changes throughout the coastal zone, and therefore, potential impacts.

The greatest initial impact will be a wider shoreline. Figure 3 displays the average shoreline location between 1961 and 1990. However, according to the CCCma 2050 scenario, the shoreline may look something like what is seen in Figure 4. According to map results, the change in shoreline area from the 1961/1990 average to the year 2050 will be 7.4 km2.

Newly exposed fine textured sands are susceptible to entrainment and transport by wind. This will cause an increase in aeolian (airborne) sediment transport off the flat beachfront. Due to a north-south orientation of the shoreline, the prevailing westerly winds will cause much sediment to be transported across Shoreline Avenue onto many cottage owners’ properties.

Potential future low lake levels may disrupt the natural pattern of the fen’s water supply. This will cause the fen’s vegetation to migrate towards both groundwater and surface water supplies (likely lakeward). Unfortunately, in some locations, the wetland is behind Shoreline Avenue, and is therefore isolated from a surface water connection. Therefore, vegetation in these wetland areas will have a greater chance of drying up and dying. Figures 5 and 6 show the distribution of the Oliphant Fen Wetland (according to 1989 data) during different water level conditions.

Components of marine navigation will be greatly impacted. The small craft harbour will require renovation or possible relocation. Dredging practices will become more frequent and costly. As well, there could be the possibility of new navigation channels to support marine travel. Figure 7 shows the location of the current navigation channels during the CCCma 2050 water level scenario.

When Lake Huron’s water level declines, there is the possibility that many new shoreland policies, regulations, and/or bylaws will be required to inform shoreline property owners of their title rights. New shoreline management practices for the newly exposed land will become an important issue, causing the possibility of many debates and public meetings.

Natural Resources Canada (2002) defines adaptation, in the context of this research, as “activities that minimized the negative impacts of climate change and position us to take advantage of new opportunities that may be present.” In order for residents, cottagers, and tourists to cope with the future lake level declines along Oliphant’s coastal zone, they will have to examine a number of strategies. Adaptation provides an opportunity to reduce environmental and socioeconomic impacts.

Since society cannot control the level of water in Lake Huron, there is little that can be done to reduce the impacts of a wider shoreline. Still, shoreline management practices will have to be developed to protect the new beachfront from unwanted activities, such as the use of motorized vehicles, for example.