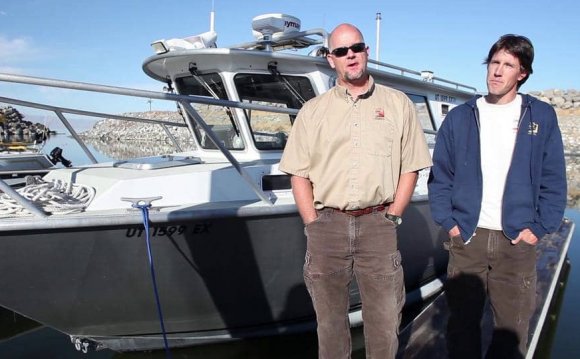 Under optimum conditions of food supply and lack of stress from increasing salinity or decreasing dissolved oxygen, fertilized female shrimp may produce eggs that hatch soon after emerging from the ovisac to produce nauplius larvae, which is known as ovoviparous reproduction. If conditions are perfect, the female can live as long as 3 months and produce as many as 300 live nauplii or cysts every 4 days. However, the cold spring-time temperatures and variable food supply in Great Salt Lake usually limit the population to two or three generations per year.

The nauplii molt about 15 times before reaching adult size of about 10 millimeters in length. Adult male shrimp are easily identified by the large pair of "graspers" on the head end of the animal. These are modified antennae and are used to hold unto the female during mating. The population of Artemia franciscana in Great Salt Lake includes both males and females and reproduces sexually, but some species of Artemia exhibit parthenogenesis, a reproductive mode in which only females are present that give rise to young females in the absence of males. Adult shrimp feed primarily on phytoplankton (algae) suspended in the water but can also "graze" on benthic algae such as blue-greens or diatoms growing on the bottom of Great Salt Lake in shallow areas. They also may reprocess fecal pellets excreted earlier in the year when large numbers of phytoplankton present in their diet were incompletely processed. A recent study showed that the shrimp can graze on diatoms that colonize shrimp exoskeleton parts released from their many molts. As the food supply becomes exhausted, salinity increases, dissolved oxygen decreases, or a combination of these conditions occurs, the female shrimp switch from producing live young to producing cysts through oviparous reproduction. In Great Salt Lake, the adult shrimp typically die from lack of food or low temperature during December. Although, live brine shrimp have been observed...