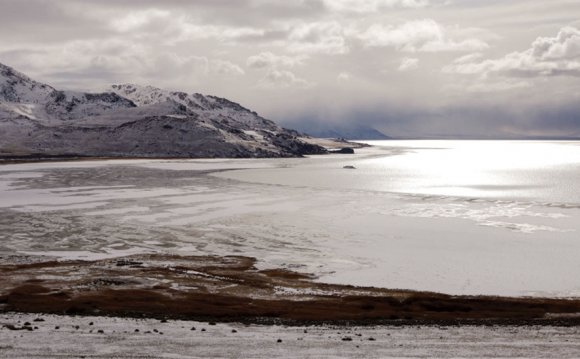 The brine shrimp harvest on the Great Salt Lake is an annual event which is regulated and monitored by the Utah State Division of Wildlife Resources. The State of Utah issues 79 permits or Certificates of Registration’s (COR) to Brine Shrimp companies. These permits usually reflect the value of a company. Due to the State only issuing 79 COR’s, the barriers to enter the brine shrimp harvest become very difficult. Brine Shrimp companies pay around $12, 000 each year per COR. On top of the COR fees, the harvest companies must also pay the State royalties from the total raw harvest. This raw harvest contains brine shrimp, brine shrimp eggs, empty shells, brine flies, brine fly casings, algae and other biomass material. During the 2008-2009 harvest season a total of 19, 646, 933 pounds of raw material was harvested from the Great Salt Lake, its shores, and ponds surrounding the lake. The tax levied on the harvesters was 3.75 cents per pound. This gave another 5, 000 to the State of Utah in royalties.

In 2006, most of the brine shrimp industry came together to form the Great Salt Lake Brine Shrimp Cooperative. The Cooperative harvests, processes, packages, markets and sales brine shrimp all over the world. There are only 2 independent companies remaining among the harvesters.

The harvest begins October 1st and will go not longer than January 31st. The harvest is monitored by the State which checks for how many cysts per liter remain in the Great Salt Lake so they may reproduce for the following harvest year. If the cyst count falls below a certain level the harvest may be suspended for a week or even closed for the year.

Competition during these four months of harvest is fierce. Spotter planes, GPS, and night-vision technology are used to locate large ribbons or “slicks” of floating egg. Once the egg slick is located the coordinates are relayed by radio down to chase boat to claim the large slick of floating egg. Slicks can range anywhere from a few yards to several hundred yards. In order to claim the slick, a boat must have a COR which is identified by a large pole attached with an orange float that has the companies COR number clearly visible. When the slick of egg is claimed competing companies must keep a 300 yard radius from the COR boat. The chase boat is soon joined by a haul boat which is to load the raw material on, and a boom boat that carries an oil containment boom to corral the egg. Once corralled the floating raw egg is pumped into porous super sacks for drainage. This process may take up to several hours.

Several conditions affect the availability of the egg from year to year. Salinity is crucial for the harvest. When the salinity falls below 5% the egg becomes less buoyant and is difficult to harvest. Salinity also affects the algae in the lake which the brine shrimp feed on. In 1997 when the salinity dropped to 11% the algae food source shifted to large diatoms that were not suitable for feed. Due to this the harvest was closed after 3 weeks and only 6, 113, 695 pounds were harvest during this harvest season. Storms also make the egg difficult to harvest. The winds will push the egg into the water column. It may take 2-3 days for the egg to resurface.