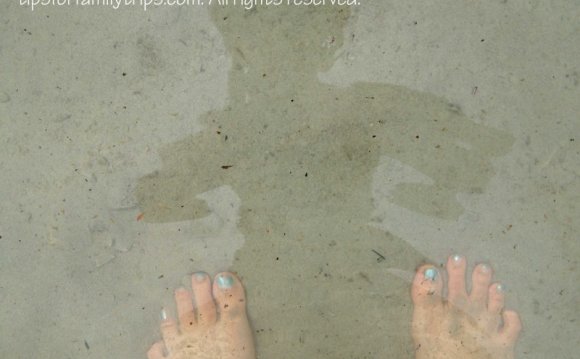 Gordon Gridley begins a 19-plus mile swim from Black Rock to White Rock Bay in the Great Salt Lake.

Standing barefoot and swimsuited on a concrete boat ramp, I eyed the shimmering surface of the Great Salt Lake. On this June morning, clouds of brine flies roiled inches above the water: mouth level if you're a swimmer. Worse, the brine shrimp had hatched, and their countless tiny bodies had turned the water - usually transparent 13 feet to the bottom - a murky brown.

"Remember, " said local open-water swimmer Goody Tyler dryly, "don't drink the water." No problem there, I thought, splashing into the warm shallows and past docked sailboats after Tyler and two others, Gordon Gridley and Josh Green. All three wore black speedos emblazoned with the slogan Got Salt? Gridley and Green are founding members of the Great Salt Lake Open Water swimming club (SLOW), which promotes swimming in the lake by holding races and selling Got Salt? attire. I share their love of open-water swimming and was passing through town; they offered me a guided lake tour.

It seemed like a good idea, exploring America's Dead Sea from the inside out. I knew the water would have roughly twice the salinity of the San Francisco Bay I was used to. I knew the salt would make me float higher, presumably making it easier to swim. But in the marina parking lot just off I-80, I began to see that the experience was going to be strange. As the four of us smeared petroleum jelly on our necks and underarms to prevent salt burns, two Lycra-clad cyclists stopped to watch in disbelief. "Crazy, " said one as she pedaled away. Then, with my face in the lake, my arms splashing to catch up to my guides and the low-level stink of decay permeating my every breath, I couldn't help but agree: Crazy indeed.

Today, few consider the Great Salt Lake a swimming destination. But in the late 1800s, the Mormon Church built the Saltair resort on its shores 16 miles from Salt Lake City. Dubbed the "Coney Island of the West, " it boasted Islamic-style minarets, a roller coaster, a dance floor and lake access for dips in the brackish water.

Over the years, fluctuating lake levels have sometimes blocked these routes. The eight-mile course from Antelope to Black Rock is accessible of late, and in 2011, SLOW resurrected it. More than 30 swimmers compete in races here each year, some hailing from as far as New York City. Gridley, Green and Tyler serve as Great Salt Lake ambassadors, inviting other swimmers to meet them here in the morning to give it a try; they hoped to win me over, too.

As it happened, I drank the water. Beyond the marina, wind-whipped waves slapped my face when I came up for air. Two big gulps had me gagging and retching, but my companions assured me I wasn't alone. Swallowing lake water was a rite of passage they'd all endured.

After about 10 minutes, with the brine flies far behind, I finally found a breathing rhythm that worked. Each stroke came a little easier than the one before. Soon, we arrived at our turnaround point, a buoy half a mile out where we leaned back to take in the scene, floating high in the water as if on liquid La-Z-Boys.

Gridley, who would cross the English Channel in August, has likely swum more miles in this lake than anyone. His son kayaked by his side on a 6.7-mile trip from Antelope to Fremont Island in 2010. They stayed the night in that treeless place of rocks and sagebrush blanketed with spider webs. "I felt like I was on a different planet, " he said.

The distant, jagged mountains, the shore's barren rockscape and the glistening water definitely gave the lake an alien feel. It is, after all, a fossil of another lake, the much larger Bonneville, which, tens of thousands of years ago, covered almost 20, 000 square miles of Utah, to depths of over 1, 000 feet. A massive flood emptied most of the basin, and evaporation has slowly sucked the shorelines since - the Great Salt Lake remaining like the last dregs of broth at the bottom of a giant soup bowl.