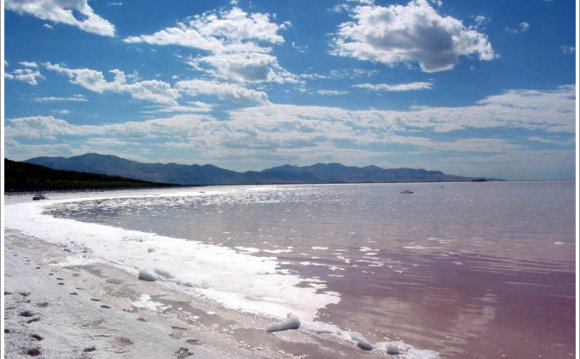 Shown above is part of the south end of the Great Salt Lake (GSL) in Utah. While flying in a small plane at an altitude of 580 m above the lake's surface, the play of light from the purple and green lake water against the blue and white sky quickly captured my attention. The reason for the colorful contrasts is the causeway that connects the west shore of Stansbury Island (seen on the left) to the west shore of the lake. The causeway forms the north end of what has come to be called Stansbury Bay. This earth-filed impoundment prevents the exchange of lake water between the bay and the water to the north, leading to a change of the bay's salinity. The change in salinity and the chemicals added to the bay by a mineral extraction company to speed evaporation result in the purplish colors. Photo taken on February 24, 2014.

Flying the Shore of the Great Salt Lake