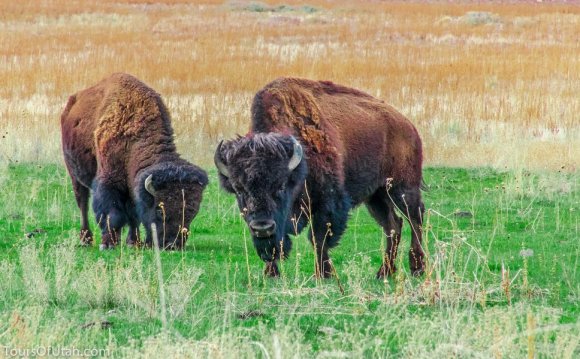 It's and we would like to welcome you to the Salt Lake Tourist & Visitor Centers official online edition. This page provides detailed information on the history of Salt Lake City.

From the earliest of times (some estimations date as far back as 8000 years), Utah was occupied by nomadic tribes. These included the ancient Anasazi Indians (1 A.D. to 1300), who were the ancestors of the modern Pueblo people. ("Anasazi" is a Navaho word meaning "The Ancient Ones".) The Anasazi lived in cliff dwellings (the largest of which can be found today in Arizona). Navajo also roamed this region, as did the Ute Tribe, from which the state of Utah takes its name. Other natives who lived in the Great Basin desert included the Paiute and Shoshone people.

The first European explorers reached this region in 1776, but the land wasn't settled by non-Indians until the 19th century.

Salt Lake City itself was only founded in 1847, on July the 24th, by a group of Mormon pioneers. They traveled what is now known as the Mormon Trail. This actually paralleled the Oregon trail. The Mormons were escaping religious persecution in the East, searching for a place where they could practice their religion freely. (Mormons are members of the Church of Jesus Christ of Latter-day Saints.)

Brigham Young & pioneers. These pioneers, led by Brigham Young, were the first non-Indians to settle permanently in the region. The initial group of 148, consisted of 143 men, 3 women, and 2 children.

It is recorded that when Brigham Young saw the valley, the first words he uttered were, "This is the place." That very day, Brigham Young's followers, began tilling the soil and planting crops. And over the next few days, plans were drawn for their future city, which was initially called "Great Salt Lake City".

It was named after the salty inland lake that dominated the desert in the west. (The word, "Great" was dropped from the name in 1868.) In the center of the city, Temple Square was founded. This is the city's most important block. All addresses are numbered from this point. 100, is equal to one city block. Each block was arranged in a grid pattern in 10-acre squares. All the streets were made 132 feet wide. This was deemed "wide enough for a team of 4 oxen and a covered wagon to turn around."

The Mormon temple itself was not begun until 1853 and the capstone marking its completion was not installed until 1892. Most of the the temple's granite blocks were individually hauled by ox and wagon.

The Mormon state was first called "Deseret". According to the Book of Mormon", this means Honeybee, which is a symbol of hardwork and industriousness. Utah's state symbol is the beehive.

When the Mormons first arrived in the valley, they lived in self-imposed isolation, and their territory was still part of Mexico. Two years later however, in 1850 (after the Mexican-American War), the "State of Deseret" was absorbed by the rapidly growing United States of America, becoming the Territory of Utah.

During the 1850's the California gold rush brought many emigrants through Great Salt Lake City and U.S. soldiers were stationed here during the Civil War.