Boating on the Great Salt Lake 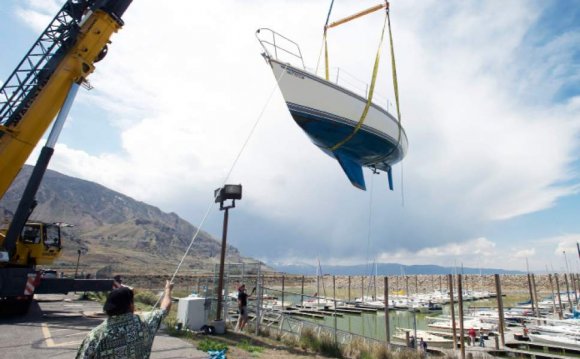 There’s no such thing as a bad day riding in an airboat on Great Salt Lake – but some days are better than others. The perfect day is a warmish spring day in Willard Spur, where the sun hides out behind the clouds and you need a light jacket once you get moving. Where you have enough water to go pretty much wherever you want, and enough birds have migrated in to make you realize how really special this place must be once all of them have arrived at the party. Kind of like the day the WRA board, staff and special guests had last Thursday.

The directions were to meet up at the Flying J truck stop in Willard around 8 am. Once you get off the highway you can’t miss it, because it’s the only thing there. Not to mention the airboats on trailers filling up the parking lot. Most of the boats aren’t much to look at, being designed more for function than beauty. All of the boats have flat metal bottoms that allow them to glide along in an inch or two of water. And all of them have V-8 engines at the back of the boat, connected to large, well-balanced propellers.

On this day, the Utah Airboat Association was kind enough to provide five airboats, with plenty of room to accommodate the sixteen of us. A few of us have had the privilege of going out on the Lake in airboats on a regular basis, but for most this was the first and probably the only time they’d get to do this. The experience is something to be treasured.

Almost everyone who visits Great Salt Lake does so either via the south shore of the Lake or Antelope Island. The south shore is easy to get to, being directly adjacent to I-80. Antelope takes a bit more work, but is worth the effort. In each case, the Lake you experience is one of vast horizons, flat surfaces, and the Wasatch Front backdrop. And everywhere, hyper-saline water. Willard Spur, however, is different.

Water in the Spur comes almost entirely from the Bear River, which provides 42% of the Lake’s inflow. Bear River flows from the north, through the Bear River Migratory Bird Refuge – a 74, 000-acre National Wildlife Refuge established in 1928 – and then into the Spur. So, unlike water found elsewhere in the Lake, ranging from 13-26% salinity, water in the Spur is almost completely fresh. Unlike other parts of the Lake where little to no vegetation survives the hyper-saline environment, the Spur is bursting with life.

Nine and a half miles end to end and four miles across at its widest point, Willard Spur is by far the most productive part of Great Salt Lake. It’s also the most remote and least known portion of the Lake. The only way of accessing the Spur is by airboat – and we have the place to ourselves.

The Utah Division of Water Quality considers Willard Spur to be a “reference quality wetland, ” which means that it’s an almost perfect wetland ecosystem. The vegetation is so thick at times that it’s impossible to find your way; but most of the Spur consists of open water wetlands covered this time of year with submerged aquatic vegetation – a critical food source for waterfowl.

Winter/Summer Sailing On The Great Salt Lake Aboard Vesica ...