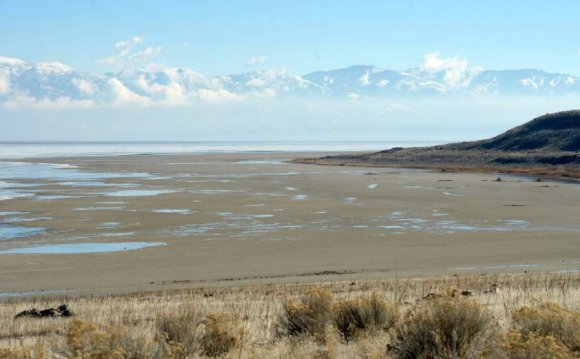 A combination of size and salt content makes Utah's Great Salt Lake unique among lakes in the western hemisphere. The current surface elevation of the Great Salt Lake is 4, 203 feet. It is 75 miles long and 30 miles wide with a surface area of 1, 500 square miles. To emphasize its size, the Great Salt Lake is the largest lake west of the Mississippi River, larger than the states of Rhode Island and Delaware.

The great body of briny water was an obstacle in the path of completing the transcontinental railroad line. The tracks were routed over the Promontory Mountains where on May 10, 1869, a golden spike was driven to mark completion of the first transcontinental railroad. This route was not easy because of the steep mountains. In 1903, a twelve-mile bridge was built across the Great Salt Lake. In 1959, a solid-fill causeway was built to replace the old trestle. This causeway still separates the north (Gunnison Bay) and south (Gilbert Bay) ends of the lake. This separation has caused the north end of the lake to have a higher mineral and salt concentration as well as higher purity as the industrial activity takes place on the southern region of the lake.

According to a geological survey issued by the U.S. Department of the Interior, the salinity of Gilbert Bay declined from nearly 15 percent in late 1995 to 11 percent in late 1997. The salinity in Gunnison Bay fluctuated only 1 to 2 percent (the average is 28 percent) during the same time.

How much salt is in the lake?

The total amount of salt dissolved in the Great Salt Lake is about 4.5 to 4.9 billion tons. As the lake rises, its salinity drops because the same amount of salt is dissolved in more water. The lower the lake level, the saltier it becomes. In the past, the lake's salinity has ranged from a little less than 5 percent (which is just above sea water) to nearly 28 percent (beyond which water cannot hold more salt).

Can I float in the Great Salt Lake?

You can easily float in the lake if the water is salty enough. At the lake's average elevation of 4, 200 feet, it is less salty and, therefore, less buoyant. Swimmers float easily in the north arm because it is twice as salty as the south arm.

Why is the lake so salty?

As water flows over or moves beneath the Earth's surface, it dissolves minerals from the soils and rocks. The streams that originate in the Wasatch Range and other nearby mountains all flow into the Great Salt Lake, bringing in water with varying percentages of dissolved minerals. Since the lake has no outlet, all of these minerals remain in the lake.

Due to the high salinity of the water, most forms of aquatic life cannot live in the lake. Certain species have adapted and, in fact, have flourished. Algae and protozoa exist in the lake and because of their simplicity in make up, they thrive in the otherwise harsh environment. The more advanced life forms are the brine fly and brine shrimp. Both exist in large numbers.

Gulls, pelicans, cormorants, terns, and herons make Great Salt Lake their home during the nesting season. The gulls and pelicans are by far the most numerous.

Locals call it the "lake effect." More than 24 inches of snow have been known to fall in a 24 hour period along the Wasatch Mountains when a naturally intense storm passes over the area. The warmer air from the lake rises, colliding with the colder, stormy air, thereby resulting in the heavy amount of snowfall particular to the Wasatch front area. These "lake effect" storms usually occur in the spring or fall and can bring intense thunderstorms as well as the heavy snowfall.

Reports and rumors of the existence of a huge salty lake somewhere in the west were heard of for more than a hundred years before any white man actually visited its shores.

The first authentic information about the lake came from the Dominguez-Escalante expedition of 1776. Leaders of the group learned from area natives of the lake which was extremely salty. The group named it "Lake Timpanogos" but did not actually travel to see the lake.

While James Bridger is the first white man known to have seen the lake, John C. Fremont was the first to scientifically examine the lake in 1843. Fremont and his crew were the first to accurately map the area and one of the ten islands bears his name.

According to the Deseret News, one of Utah's daily newspapers, Shoshone and Goshute Indians used to live on or near Antelope Island. A son of Chief Wanship and his family were living on Antelope Island when Fremont explored the lake.

For more information about Utah's Great Salt Lake, see the links below.

Mineral Resources International is proud to be a corporate sponsor of Friends of Great Salt Lake. Founded in 1994, its mission is to preserve and protect the Great Salt Lake ecosystem and increase public awareness and appreciation of the lake through education, research, and advocacy.